Tool wear
This is the most important parameter since wear of cutting tools has a direct impact on the machining result. Reduced wear contributes to better machinability.

Chip breaking
The kind of chips formed and how they break depends largely on the material. Small chips are preferable to reduce the risk of snarls that can affect the cutting result while it facilitates chip removal.
Shorter chips contributes to improved machinability.

Surface finish
A material that allows for higher tolerances and with less tendency to micro-cracks in the surface contribute to improved machinability.

Chip breaking
The way in which a chip breaks 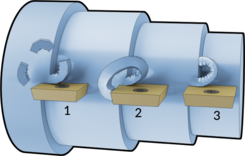 Test the quiz General sponsored by