In thermal cutting, different types of shielding and cutting gases are used

For example, Gas Cutting 2D uses gases to perform and support the cutting process itself.
Burning gas
The burning gas is the gas that preheats the workpiece up to a temperature near the melting point.
Cutting gas
The gas supplied to ignite the heated material creating the cut.
LASER
Translation in progress 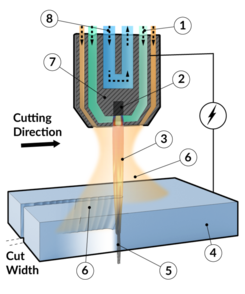